i’m not a dog person

August 18, 2010Posted in day to day, personal, phoenix
That’s what I told James when I first met him. I walked into his apartment on approximately our 3rd time hanging out and two dogs came barreling at me (one his – Phoenix, & one his brother’s – India) and I freaked out a bit. I yanked my arms and purse up in front of my chest (as if they might steal it…?) and hid behind James to avoid these two stinky beasts. He said, “Don’t you like dogs?” And I quickly replied, “I’m not a dog person.” (I’m shocked that James actually continued dating me to be honest, now that I know him… and know how much he loves dogs).
To be fair – I wasn’t raised with any “real” pets (we had parakeets, hamsters & fish… my parents said 5 kids was enough for them – I can’t imagine why!) so I never understood the love people had for their animals. I tended to avoid dogs my whole life and even needed to be carried into my childhood best friend’s house by her mom occasionally because they had a german shepherd that I was scared to death of (pathetic, I know…).
But now, nearly three and a half years later, I am definitely a dog person. I think I actually became a dog person somewhere around the one-year mark of knowing James (and Phoenix)… perhaps even sooner. Phoenix was too sweet not to fall in love with – and the fact that she loved me back helped some too. James  will still admit that noticing Phoenix liked me right off the get go had him smitten with me as well. (He had Phoenix for 10 years before I came into the picture…)
Well, now every time I talk about how cute a dog is – or swoon over a puppy – or spoil Phoenix rotten – or anything of the sort – James says (in his best attempt at his “Christy voice”), “I’m nooooot a dog person….” (but it kind of comes out sounding more like a valley girl and less like me… please tell me I don’t sound like a valley girl…).
Oh well – I’ll take it. I’m perfectly happy being a ‘dog person’ now. After all – I get to sit here at the computer while I edit pictures and post on my blog – and all I have to do is glance behind me to be reminded that somebody loves me like crazy: 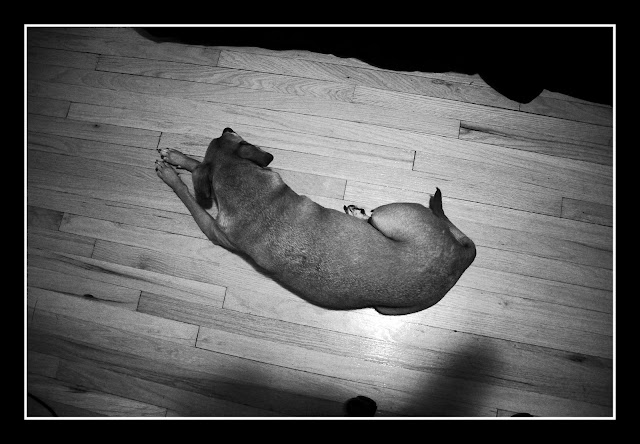 Seriously… I can’t even roll backwards in my chair or I’ll run the poor thing over. How sweet is she… 🙂

« everything’s hotter in texas
somewhere over the rainbow »