November 1, 2010Posted in day to day, personal, phoenix
Today has been a productive day for me and I’m convinced it’s because of the constant moral support from the one… the only… Phoenix. 🙂
I’ve been at the computer all day editing and burning CDs for clients and she’s been laying behind me on the futon the entire time. It’s pretty cute actually. If I get up to go to the bathroom – she follows me and scratches on the door after I’ve gone in, like – Hey mom! You can’t go pee without me! If I go to the kitchen for food – she’s my shadow – within inches of me the whole time. And if I haven’t moved from the computer in a while she’ll get up and paw at my leg and make a crazy squeak noise until I look at her – at which point she tilts her head from one side to the other, her ears perked up, and quietly growls at me.
I’ve learned that this means – Get up and play with me! Enough of this sitting around crap! So then I get up and we run laps around our tiny apartment (her chasing me, of course) until she runs out of steam (actually… I usually run out of steam first but I refuse to let a 14 year-old dog beat me, so I push on).
Then it’s back to the futon for her and editing for me… It’s a nice little arrangement we have going. We keep each other balanced. 🙂 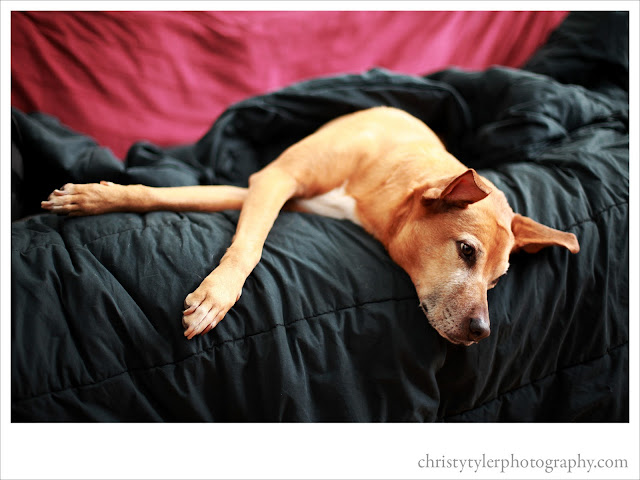 Here she is – chilling on the futon behind me. She loves to let her head hang off the edge of things… weirdo.
…