December 1, 2010Posted in personal
I received a phone call from James yesterday while I was at work in which he informed me that I’m a hoarder. I gasped in dismay and disagreed wholeheartedly, of course.
You see – he’s in the middle of repainting all the trim in our place and while he was doing so – apparently decided it would be a good idea to clean out my office as well.
I’ll admit, I had a *few* things stashed away in a box in the corner of the room that I’d occasionally dig through to find whatever it was I needed. I may or may not have had this box in this same condition since I met James almost four years ago. I may or may not have moved this box with me to 3 different apartments. I may or may not have ever unpacked this box. And I may or may not have acquired a new box full of stuff that sat next to the first box.
But that still doesn’t make me a hoarder.
Hoarders have ROOMS and HOUSES full of stuff, not boxes full.   Right?   … Right?!
So I came home from work that day to find the corner of my office completely dismantled and strewn about the apartment. I freaked out a *little* bit. It was a lot more stuff than I realized once it wasn’t neatly tucked away into the corner anymore. And the mess kind of made me have a teeny anxiety attack right then and there (…that may have resulted in me getting upset with James for ruining my perfectly organized corner!) before coming back to my senses.
I explained to James that it’s not that I’m a hoarder – I’m perfectly capable of getting rid of things… it’s just that I don’t have time to go through all this crap and figure out what I want to keep and what needs to go! So – of course, he offered to do that for me.
The rest of the night was spent with James holding up an item and asking me what to do with it while I edited pictures and did my Christmas shopping online. By the end of the night this is what we had…
A newly organized(ish) corner of the room (with an old TV stand turned into a shelving unit – to be replaced with a legit storage unit) and a pile of stuff in the kitchen to get rid of. Guys – we’re talking lotions and bubble baths that have never been opened that had interesting looking color changes and growths inside. (I’m super ashamed to write that – but hey… I’m all about full disclosure.) 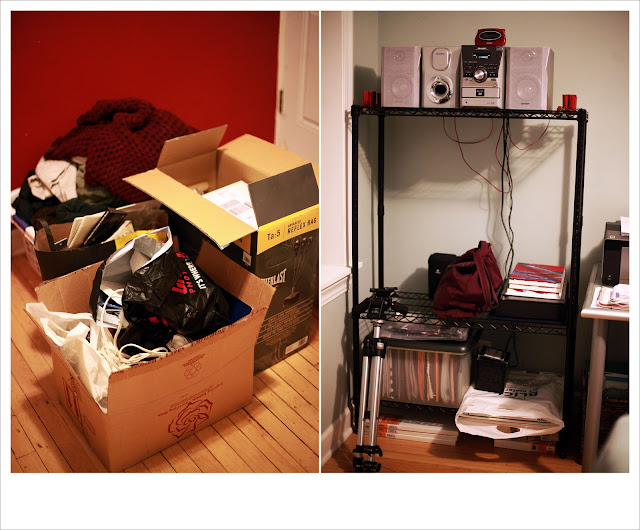 Because I was able to rid myself of these things – I still maintain that I’m not a hoarder. Because hoarders don’t throw stuff away. Ever. Even if their husbands offer to help them go through the junk. And I do feel surprisingly better now that the corner isn’t packed full of stuff from the floor up. (Thanks James.) In fact, I was so inspired, I even went out and bought a white board/cork board for the wall to keep my lists organized and got a planner for myself.
And in the near future we plan to rearrange the room and replace the current corner situation with a real storage unit… I know, you’re proud of me, aren’t you…
One step at a time people… One. Step. At. A. Time! 🙂
…

« sitcoms were way cooler back then
meeting sunshine »