October 8, 2010Posted in recipes
When I was busy listing all the things I love about fall – I forgot one tiny thing that I’m not such a fan of… the start of cold and flu season.
I’d been doing all I could for the last few weeks to avoid catching the various bugs my coworkers have been sharing with each other, but apparently it wasn’t enough because our germ infested office eventually won and I got sick. The worst part about it? I got James sick too.
Now, of course I don’t like to see my hubs feeling under the weather – but that wasn’t the reason it was so bad. The reason it was so bad was because he knew I was the one who passed my sickness on to him… not someone at the gym, or the store, or a friend. Nope. It was me… and he won’t. stop. pointing. that. out. According to him – I owe him. Big time.
All he’s been talking about since he’s been sick is how badly he wants oatmeal raisin cookies. And of course – he deserves them – because I got him sick. The first couple days he asked for them so late at night that I couldn’t make them for him or I would have fallen asleep while cracking the egg into the bowl.  So today I promised I would make them right when I got home from work. (He even remembered to set a stick of butter out for me so everything was ready to go. How helpful.) 🙂
Then I got home, looked over the ingredient list and realized – we have no brown sugar! Hmph.
“Sorry James – no cookies tonight,” I said (secretly a teensy bit relieved… Bad wife).
Then I saw his face. He looked so bummed I actually felt bad for the poor, sick guy. My guilty conscious got the best of me (he was super sweet to me when I was sick…) – so I flipped through my cookbook and found the one cookie recipe that doesn’t call for even a pinch of brown sugar:  Molasses Cookies! 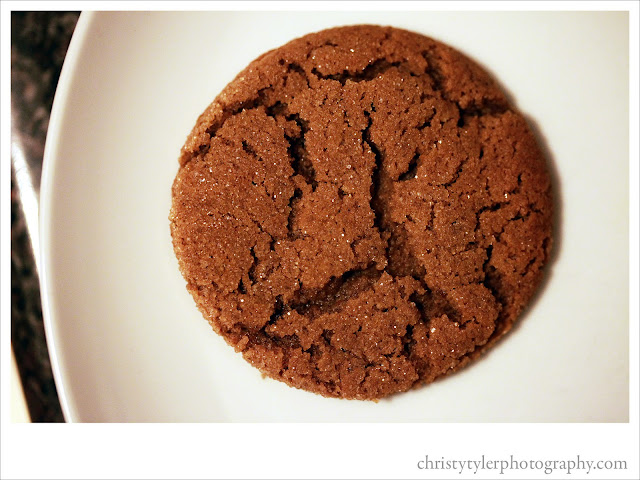 After eating a *few* too many he thanked me and then kindly asked me to pleeeeease take the rest of the cookies to work tomorrow, or hide them – at least.
This man seriously loves homemade cookies. And I love making them. I think we may have a problem. 🙂
…
And don’t worry – of course I’m going to spread the love! Here’s the recipe:
Ingredients
1 cup sugar
3/4 cup shortening
1/4 cup light/mild molasses
1 egg
2 cups flour
2 + 1/2 tsp. baking soda
1 tsp. cinnamon
1 tsp. ginger
1/2 tsp. ground cloves
1/4 tsp. ground cardamom
1/4 tsp. salt
extra sugar
Directions
Heat oven to 350 degrees.
Combine sugar, shortening, molasses + egg. Beat until blended.
Add flour, baking soda, spices + salt. Beat until dough forms.
Shape dough into 1-inch balls. Roll/dip half in sugar.
Place sugar side up on ungreased cookie sheets.
Bake 8 to 12 minutes until set.
Enjoy! 🙂
(Editor’s note: We didn’t have cloves or cardamom… so I made it without since those were the last two ingredients and I didn’t realize we didn’t have them until everything else was already in the bowl. Oops! And the cookies were still delicious! Just an fyi. In case you don’t have those lying around. :))
…