September 18, 2010Posted in personal
As many of you know, earlier this week I promised a post about my birthday surprise… so here it is! (Hang in there – it’s a long one!) 🙂
First of all, this entire situation started by James mentioning to me a couple weeks ago that he called dibs on Saturday the 11th to spend time with me because he had made some birthday plans for the day. (Is it sad that my husband has to call ‘dibs’ on days to spend with me because I’m so busy constantly working? :-\)
It turned out that I had already planned to attend a book club meeting that James had forgotten about. He was not too happy with me when I brought it up. He said, forget it – we’ll do it another time and later vowed to never make plans again… eek! Luckily, (after lots of begging from me) he had a change of heart and decided he could still make the ‘plans’ happen if I could get out of the meeting by 4pm – which was totally doable. Yay!
The night before the big day I asked him what he was wearing for these so-called ‘plans’ and he pulled out some nice linen khakis and a black sweater. Hmm. Very vague, I thought. What on earth am I supposed to wear if he’s wearing that?! While he was at the gym that night, I tried on approximately 235,000 outfits (or so it seemed). Nothing worked for me – some felt too sexy, some too fancy, and some too casual… nothing seemed right! So finally, when James arrived home from the gym he said he’d help me choose an outfit. I tried on numerous for him and we finally agreed upon some dark, skinny jeans, black heels, a black short sleeved shirt and some gold accessories to dress it up some. I was ready. to. go. (to what I assumed to be a night out in the city either with friends or on our own).
The next day came and I made sure I was all ready to go straight from the meeting at 4 o’clock (which I wore my outfit to – minus the skinny jeans & heels… those I planned to change into later). When I headed out the door I gave James a call to let him know that I was on my way home (per his request). He told me to meet him by his brother’s apartment since he had to stop there to drop something off. I thought James was acting kind of weird but just brushed it off.
When I arrived at his brother’s street I realized something was definitely up when I saw James with two overnight bags in his arms. I smiled at him and said, “What is going on here?! Did you drop Phoenix off at Rich’s?? Why do we have overnight bags?!” He sternly said, “No questions,” threw the bags in the back seat, and told me to hop out so he could drive.
And off we went. Not home for me to change into the rest of my outfit like I thought. Instead we headed north towards the highway and out of the city.
To put it lightly – I was freaking out. You see, I’ve always known I’m a bit of a control freak, but this experience really opened my eyes to just how MUCH of a control freak I am. I was incredibly uncomfortable not knowing where we were going or what we were doing (and with the fact that James had packed my bags for what appeared to be a weekend away) and to make matters worse – he refused to answer any of my questions.
Instead, he asked me to grab him a CD out of the CD case. 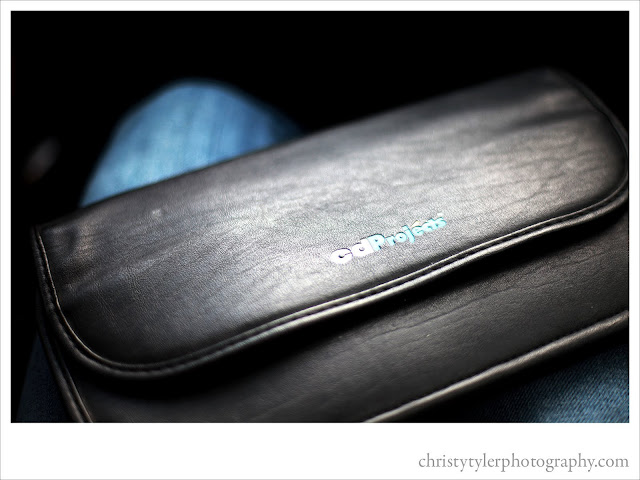 I opened it up and found this: 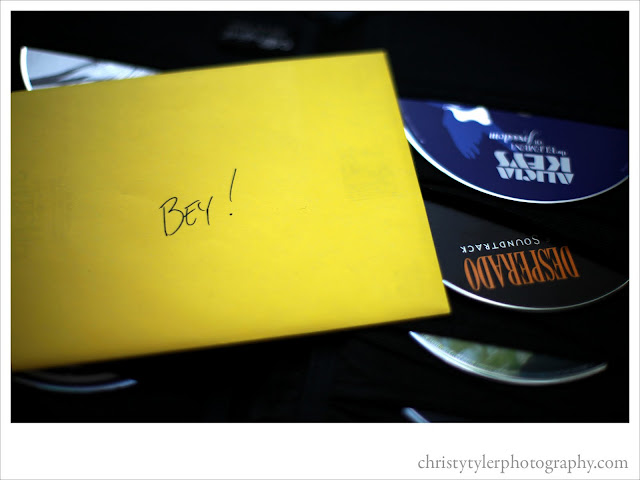 Inside the card was somewhat of an explanation (which basically said that I had to vow to stop asking questions or he could call off the plans at any point during the drive) and a mixed CD (super lovey dovey high school style – I know. Don’t you love it?!). 🙂 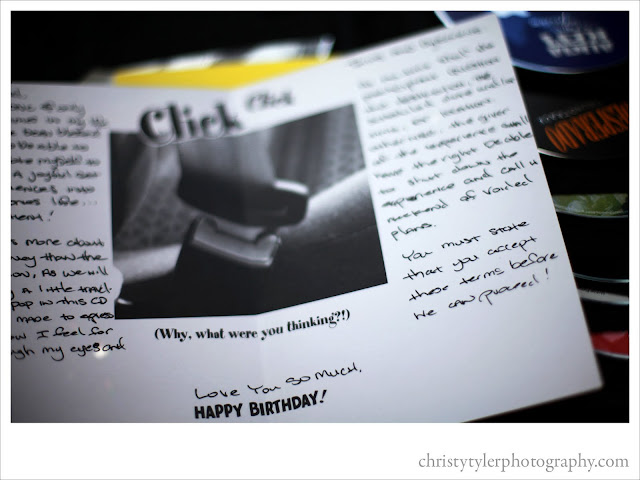 Look at how mischievous he looks! What a punk… 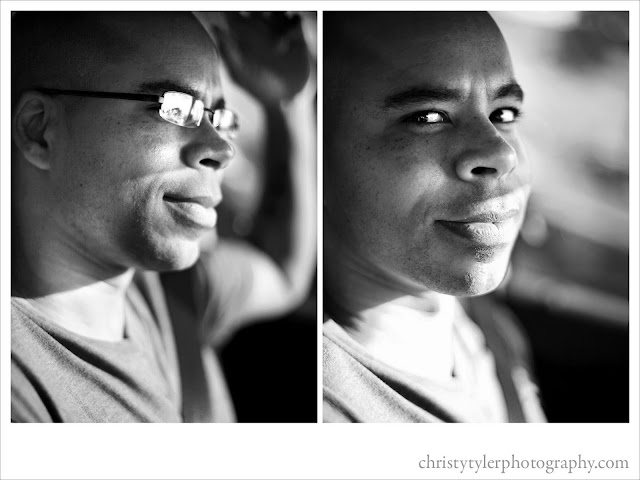 As much as this lovely man wanted me to listen to the CD, all I could think about was where in the hell we were going! (Which he was not super stoked about since he spent a lot of time picking out what songs to put on the CD… oops. :)) To distract myself and calm my nerves I started to take a lot of pictures (like the one below – of the road out of Chicago). 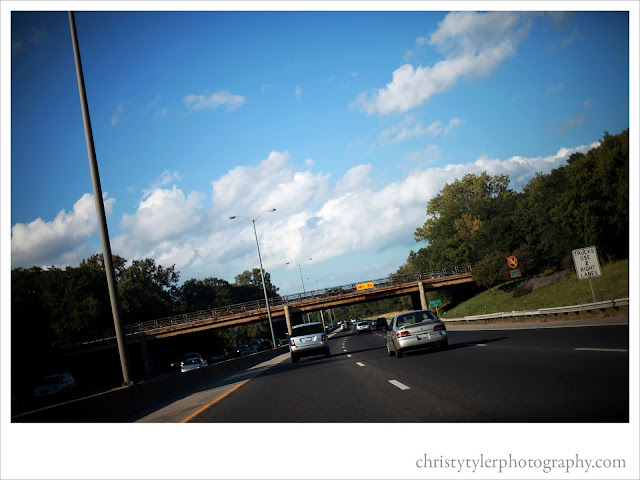 Apparently its very therapeutic for me (which I should have known by now – duh) because it worked – I calmed down and was able to *mostly* enjoy the ride and the music.
At this point I was pretty convinced – based on James’s random comments – that we were either going to a Packer game the next day (never mind it was apparently not a home game, which I didn’t realize at the time) or going up to Green Lake where we got married. Somewhere along the way he asked if it was okay if we swung by my parent’s house to get the box spring and frame we had ordered for our new mattress on our way through the area. To which I answered, “These are your plans, you do whatever works – as long as I get to eat some dinner soon!” He decided we had time, so off towards home we headed…
At about this time I was so hungry and tired of driving that I was *secretly* hoping the surprise was actually something at my parent’s house so we wouldn’t have to get back in the car to go anywhere. While I was wishing that – I was also getting anxious that I may be right – so I took some more photos to calm myself down again: 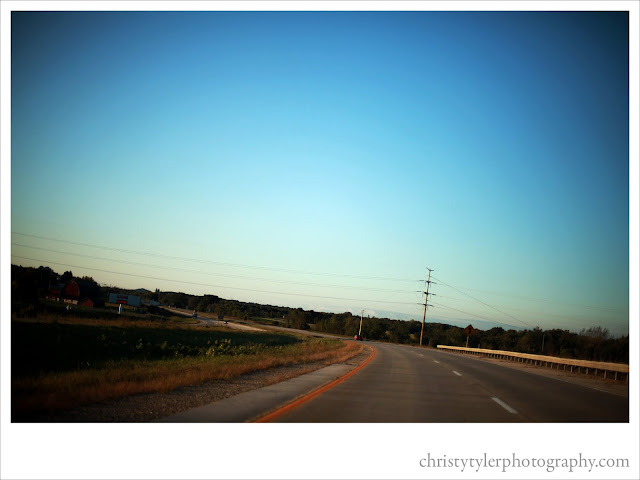 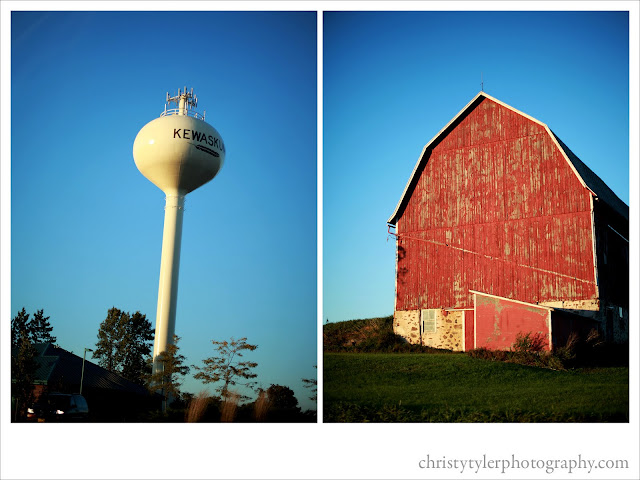 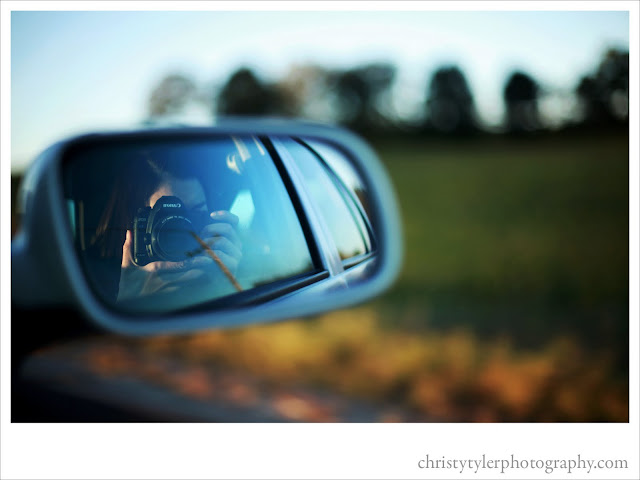 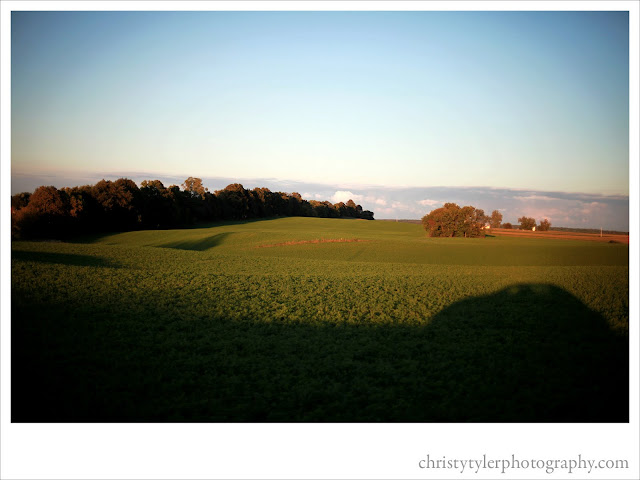 We pulled up and I saw these… cars?! 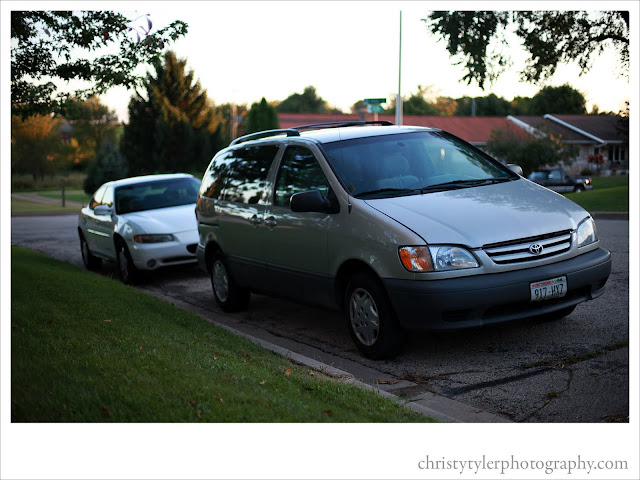 Hmmm… I knew one was my sister’s and the other I did not recognize at all. Either way – at this point I definitely knew something was up! 🙂 (Yay! We don’t have to get back in the car & drive somewhere – I thought!)
When we walked in the house there was nobody in sight (except for my brother-in-law running out of the kitchen into the backyard – lol!). James quickly led me to the backyard where I was greeted with a big SURPRISE!!! and cheers from my immediate family and some very close old friends. 🙂
And yes, I was actually surprised! I think I screamed… I’m pretty sure I screamed. This was way better than the surprise I had envisioned (a night out in the city) and I was soooo happy that my hubs knows me well enough to know that the one thing I needed as of late is more time with my family and friends. You see, I’ve been so dang busy since May that I have barely seen or spoken to many people in my life that I would love to see and speak to daily (which I mentioned in a previous post here). So this wonderful gathering of people I love was absolutely just what the doctor ordered. THANK YOU JAMES & to all those who helped and came to spend the night/weekend with me! 🙂
(I’ll stop talking now (for the most part) and let the pictures tell the story for a bit!)
They had the backyard all cute – with Christmas lights strung about and balloons on the table… 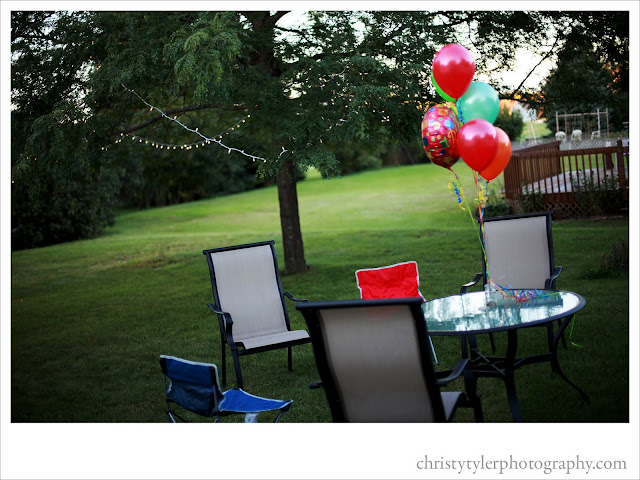 Nearly immediately my nephew insisted on showing me the cake he and his brother had decorated for me (sprinkles galore!)… so cute. 🙂 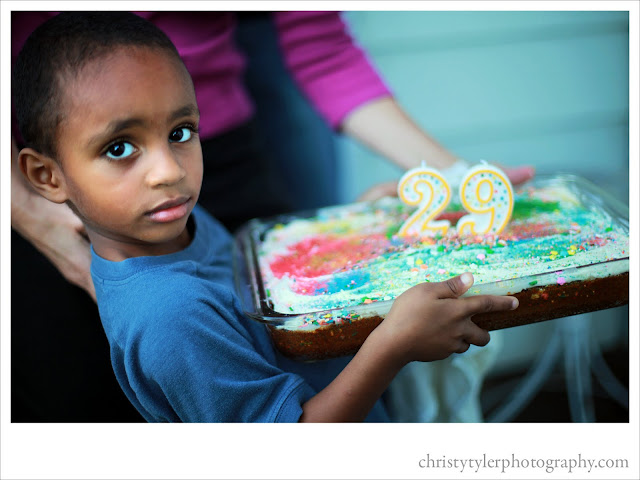 James took care of all the grilling and made sure everybody was having a good time. (Seriously, it was like nothing I’ve ever seen before out of him! That man was all over the place and super jazzed about it. He was just happy to see me enjoying myself around some of the most important people in my life. What a sweetheart.)
(Here James is handling the food and on the right is my nephew’s attempt at puppy-dog eyes to get us to serve the cake… which apparently looks a lot more like Edvard Munch’s The Scream and nothing like puppy-dog eyes – scary! haha) 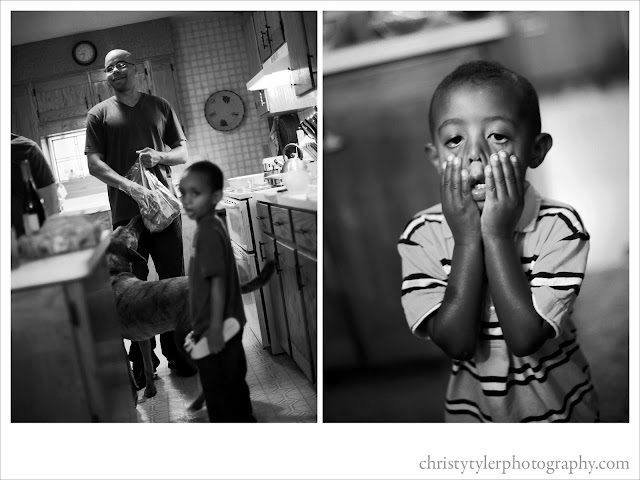 Either way – his attempt at puppy-dog eyes worked… time for cake! Somebody’s ready! 🙂 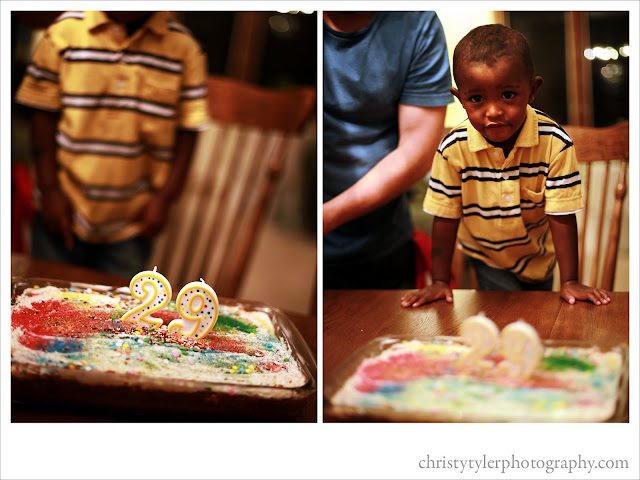 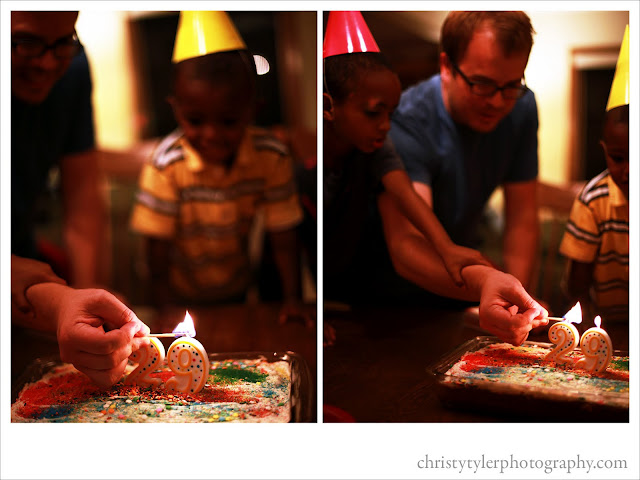 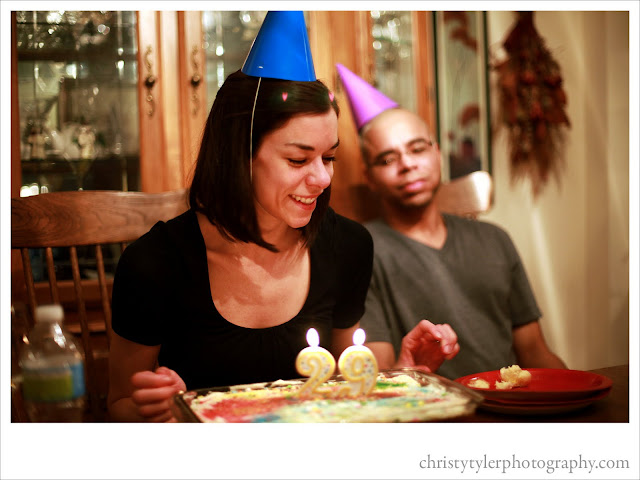 I think one of my littlest nephew’s all-time favorite songs to sing is the Happy Birthday song. Seriously – the kid gets the biggest grin on his face when he or anyone else sings it (especially when cake is involved & its a real birthday). In the pic on the left I laughed so hard at his adorable little self that I blew out my candles inadvertently! So then we re-lit them and I invited the boys to come sit with me and help me blow them out (much more fun that way). 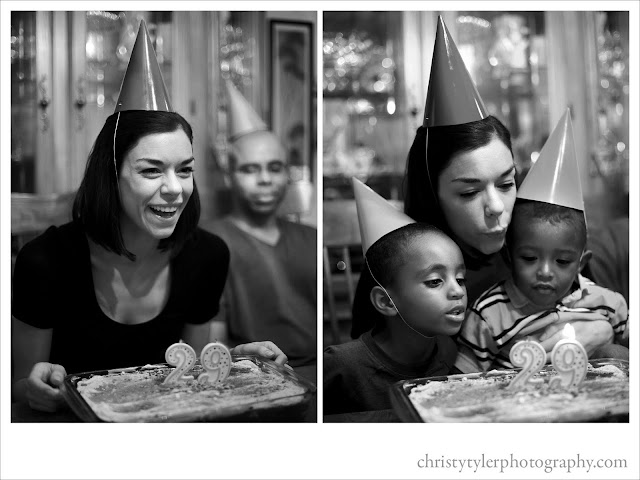 Everybody looks stellar in party hats – don’t you think?! 🙂 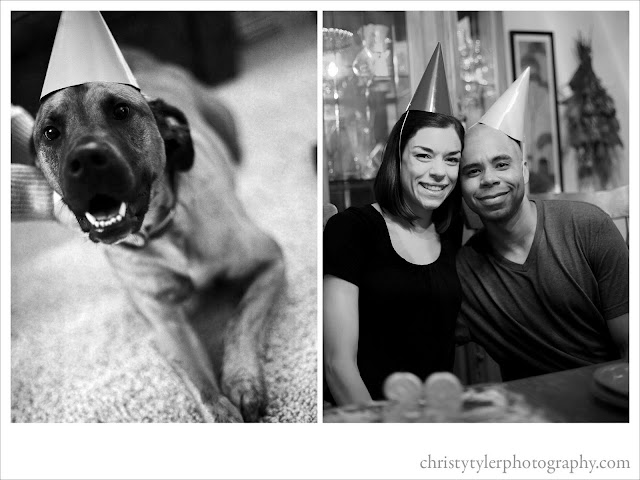 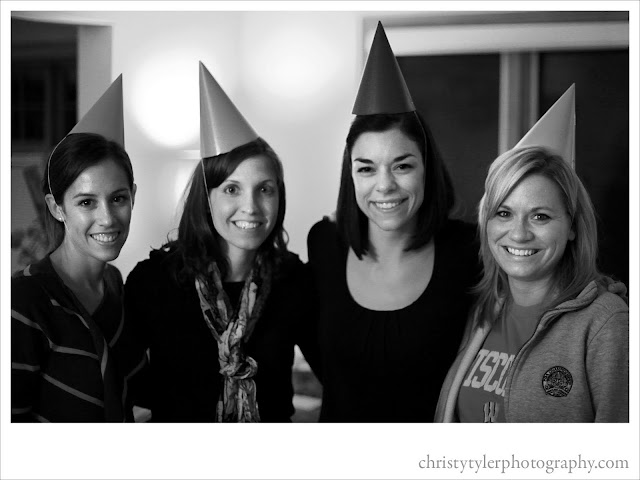 I’m a little uneasy about these two numbers… 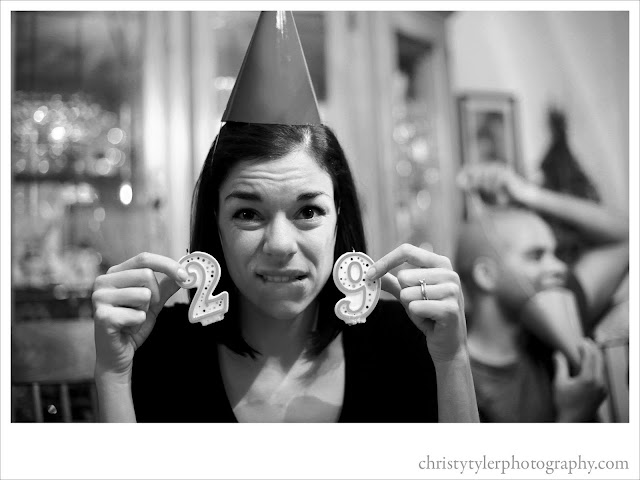 I love love love white lights – so I had to head outside and get a few more shots of the decorations in the dark: 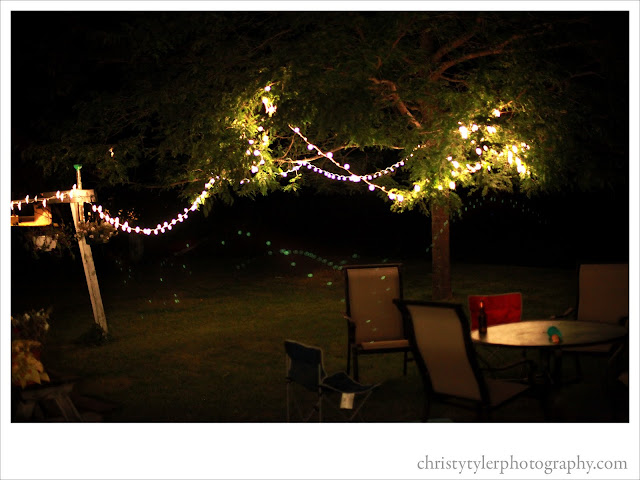 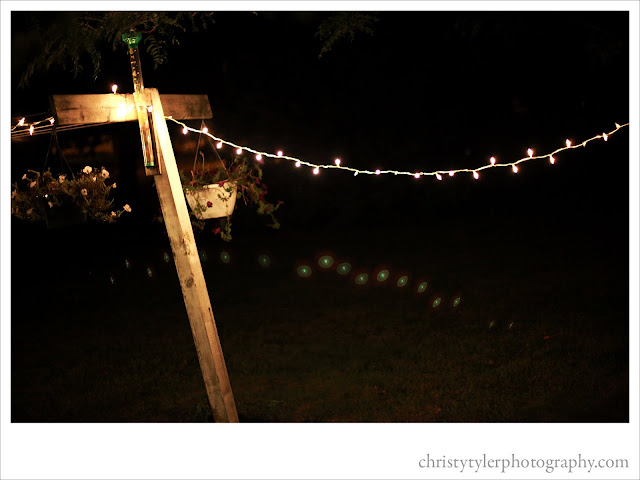 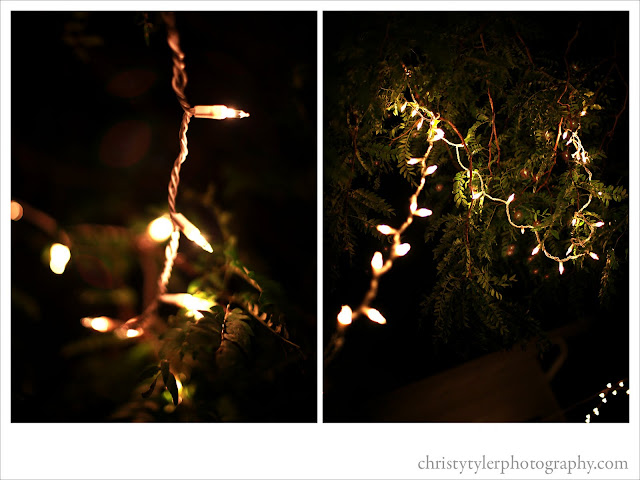 The next day consisted of lots of hanging out, playing with balloons… and of course, watching the Packers win the first game of their season. Yay! 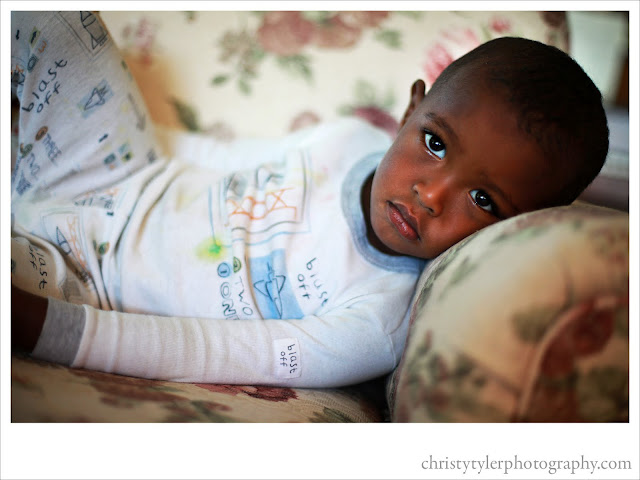 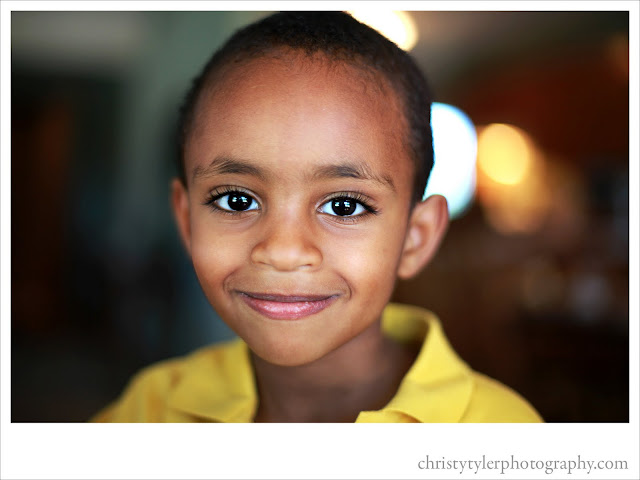 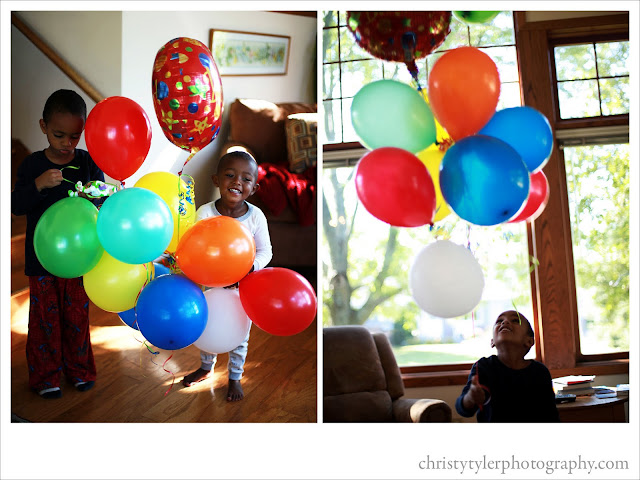 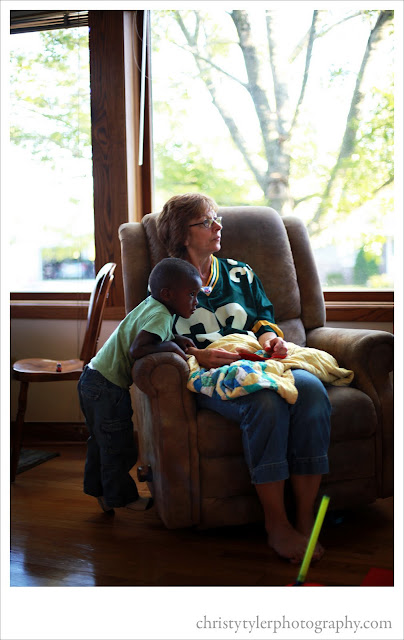 All in all – I’d say it was a pretty fantastic surprise weekend away from the city. 🙂 Thanks again baby! (and to all that came and helped me celebrate – love you guys!!!!) XOXO 🙂